Young and the Restless Spoilers - Y&R

Days Of Our Lives Spoilers

Following on the equal humor tradition of the Just Jokes and Humor blog we’ve had Obama Jokes, and now for some Hillary Jokes … that’s Hillary Clinton Jokes for the uninitiated! The first question is obvious … Hillary Jokes? What in the world are Hillary jokes? After all, Hillary Clinton is said to have had her funny bone removed. Ta dum. Not exactly a political jokes or political humor magnate. Uh oh, she’s taking names now! 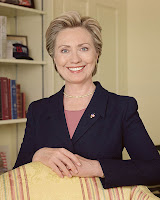 As with Senator Obama, the late night talk shows have no shortage of Hillary Clinton jokes. Here is one from David Letterman:

"Hillary Clinton is the junior senator from the great state of New York. When they swore her in, she used the Clinton family Bible. You know, the one with only seven commandments.”

Q. What’s the difference between Hillary Clinton and Pinocchio?
A. One’s a puppet? Good guess, but nope. With Pinocchio you can see when he’s lying.

Back to late night jokes, with a Hillary joke from Jay Leno:

"Hillary Clinton's campaign wants Barack Obama to publicly renounce Hollywood producer David Geffen's statement attacking the Clintons. ... Geffen said, I know everyone in politics has to lie, but the Clintons do it with such ease, it's troubling. I think that's an unfair statement. Just because you're really good at something doesn't mean it's easy."

Uh oh ... Hillary Clinton touched the third rail of American politics, race. Having done so, she opened herself up to political Hillary jokes about her use of race due to her primary hyperbole against Barrack Obama, after all it was said her main strategy was to use race as a wedge issue scaring the white Democratic party voters. Not a joke, but an un-funny variation on the old racial stereotype that a black person lacks experience and substance and therefore cannot possibly be a leader, like a quarterback. The NFL proved that joke wrong (so did the Fox TV show 24), but un-funny Hillary Clinton joke is that it worked as her share of the white vote skyrocketed after Iowa.

Ok, let's lighten it up with some more bad Hillary Jokes on this theme:

Q. What did Hillary Clinton say to the civil rights marchers?
A. Don’t bother, it was already done by Lyndon Johnson.

Q. What did Hillary Clinton say to the two women who were passing by, one black and one white?
A. Hi ya’all, I have always supported civil rights, I am so energized to see you are integrated ... let's do lunch sometime ... see ya, bye.

Don't worry though the political humor pendulum will swing back left for sure.

Jumping on the not really Hillary jokes bandwagon, Hillary Clinton did an interview with ABC's Cynthia McFadden:

McFadden: "Can you control him?" referring to husband Bill Clinton of Monica Lewinsky fame.
Hillary Clinton: "Oh of course".

"According to the New York Post, Hillary Clinton used three private jets in a single day in a campaign swing through South Carolina. And today, she was officially named a Hollywood environmentalist."

"Hillary said today that she knew nothing about her brother's involvement (in Clinton's pardons). I believe her. This woman didn't even know who her husband was having sex with. How is she going to know what her brother is doing? Six months ago, she just suddenly found out she lived in New York!"

"Last week, it got a little dramatic. Senator Hillary Clinton called General Petraeus a liar. And believe this, if there's one thing she knows, it's how to spot a guy who's lying."

Popular posts from this blog

Halloween Jokes II Thinking of the season, here's some more Halloween Jokes. Before we know it, Halloween will be around the corner, it is time for the annual Just Jokes and Humor Blog Halloween Jokes and humor update. You can find more Halloween Jokes by following the link . Here are some pumpkin jokes, ghost jokes, ghoul jokes, witch jokes, skeleton jokes and Dracula jokes to lighten up the season... What do birds sing on Halloween? Twick or Tweet. Why were there no leftovers after the monster party? Because everyone was goblin! Where do baby ghosts go during the day? Dayscare centers. What is the first thing ghosts do when they get in the car? Boo-kle their sheet belts. What did the ghost buy for his haunted house? Home moaner's insurance. What was the favorite game at the ghost's birthday party? Hide and shriek! What do ghosts serve for desert? Ice Scream What was the witch's favorite subject in school? Spell-ing. Why do witches fly on brooms? Vacuum
Read more

Turn the clock back and let's party like it's 1999. An old Y2K Joke: Dear Boss: Mi hope I haven’t misunderstood your instructions. Because to be honest, boss, that Y to K dates problem doesn't make any sense at all to me. Well by now I have finished converting all the months on all the company calendars so that the year 2000 is ready to go with the following improved months: Januark, Februark, Mak, Julk. In addition to that, I've changed the days of the week, so now they are ready for the year 2000 and will be: Sundak, Mondak, Tuesdak, Wednesdak, Thursdak, Fridak and Saturdak. Is it enough, or should I change any other Y to K? I am a fan of the New York Yankees. Should I call them New Kork Kankees in order to be Y2K ready?
Read more

Q: What is a maintenance-free house.... A: There hasn't been any maintenance in the last 10 years. The home buyer thinking of the real estate agent: I didn't think anybody could have that many teeth without being a shark. Q: When is a one-story house a two-story house? A: You get one story before you buy and the second story after. This house is 5 minutes from shopping ... if you have an airplane. News and stories behind the humor in the Real Estate Jokes page at Humor-and-Jokes.com The home buyer told the real estate agent that he lived in the same big house for the last 10 years. When the real estate agent checked his credit, she found out he still would be there today without the pardon from the Governor. Q: How close was the house for sale to water? A: In the basement. By the time you pay off a house in the suburbs, it isn't. Q: What is a house-warming party? A: The final call for those who haven't sent a wedding present. Your home feels like a c
Read more